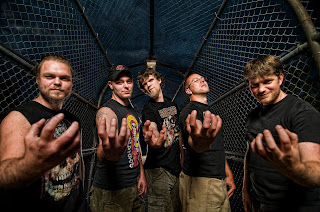 1. Can you tell us a little bit about the band for those that have never heard of you before?
We are a band of brothers. We've been together for the past 7 years, and we are looking forward to the next 7.

2. How would you describe your musical sound?
We sound like 50 foot tall giants fighting pterodactyls with chainsaws!

3. What are some of the lyrical topics and subjects the band explores with the music?
Demons having sex with corpses, various literary sources, the Heavy Metal subculture, and more.

4. What is the meaning and inspiration behind the bands name?
The 'Tribune' was a Roman political position that was considered to be the representative, or defender of the plebeian (common) people.

5. What are some of the best shows that the band has played so far and how would you describe your stage performance?
Every show we play is unique, and that has made it really hard to pick out our favorites within the last 7 years. Our live show is one of our main strengths. We don't use frills or gimmicks, we just lay down our tunes, and have a good time doing it.

6. Do you have any future touring plans?
We have a 2 month North American tour staring in mid April to promote our newest album 'Elder Lore/The Dark Arts,' that will take us throughout the States, and Canada.

7. On a worldwide level how has your music been recieved by fans of extreme and underground metal?
We have just begun our campaign for world domination, and this album will be our first step towards possessing the minds of the masses.

8. Are there any other projects besides this band or is this a full time line-up?
This is definitely a full-time lineup.

9. What direction do you see the music heading into on future releases?
We see the musical future in Tribune as progressively playing on our strengths, and becoming both heavier and more melodic.

10. What are some bands or musical styles that have influenced your music and also what are you listening to nowadays?
Our influences are: Pantera, Metallica, Opeth, Slayer, and right now we're listening to: Mastodon, the Black Dahlia Murder, Gojira, Suffocation, Darkest Hour, and more

11. Outside of music what are some of your interests?
Playing D&D, reading, martial arts, painting, sketching, and cannibalism.

12. Any final words or thoughts before we wrap up this interview?
If you're interested in finding out more about Tribune you can find us at tribunemetal.com, on facebook, and follow the band on twitter @tribunemetal
Posted by OccultBlackMetal at 3:50 PM No comments:

Drums  range  from  slow,  mid  paced  to  fast  drumming  with  a  great  amount  of  brutal  sounding  blast  beats,  while  the  bass  playing  has  a  very  strong  and  powerful  tone  with  death  metal  riffing  that  dominates  throughout  the  recording. 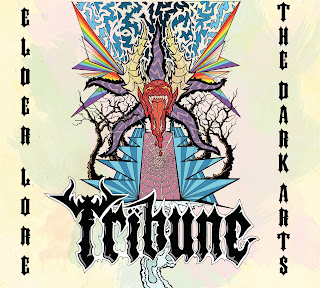 1. Can you give us an update on what is going on with the band these days?

- we are rehearsaling for the upcoming shows/tours and making new songs for the next album. We
just changed new guitar player to replace Markus Salo, and the new guy EP Mäkinen has helped us
before as a session member, so he was already like part of this machine, heheh.. This will be new
era for the band, and we want to make everything better than before. I don't mean that we are not
satisfied of this album, but we just want to take new direction.


2. How would you describe the musical sound of the new album and how it
differs from previous releases?

- When we started the music sounded more like, "melodic metal with hard rock riffs and screaming vocals".
So, the journey has been long and lots of things have changed, hehe. The latest demos sounded naturally
more like this new album.. At the moment music is combination of death/thrash stylish metal with melodic
lines and technical riffs.. I would like to say it is simply Extreme Metal.


3. What are some of the lyrical topics and subjects the band explores
with the music?

- Society and the things that are against our freedom to make own decisions Corruption, manipulation,
greediness, total control to name a few. Just check out what happens around the globe. The way how the
big companys handle their employees and other countries to get more profits without caring any of rules.
Whole educational and economical system needs to change big time. Do they really give a fuck who you are
and where you come from? - Noup. I don't mean that society needs to pamper people, but is the life worth
to race to tomb? These are the things that pisses me off a lot and makes me scream out, hahah.. Also
people that don't find out anything sensible in their lifes makes me damn angry. Wake the fuck up, you only
live once!


4. What is the meaning and inspiration behind the bands name?


5. What are some of the best shows that the band has played so far and
how would you describe your stage performance?

- Warm up show for Finnish metal band called, Diablo. We played in front of about 800 people and the circle
pit was on almost all the time. Absolutely one of the best moments in band's history.. Also record release
party was awesome show, and all the tours we have done in Baltics have been damn cool time on the stages!


6. Do you have any touring plans for the future?

- We will tour with Chimaira in Europe, march/april 2012. So, people around Belgium, Netherlands and
Germany come and check us out! This will be absolutely one of the high lights for us!


7. On a worldwide level how has your newer music been recieved by
extreme metal fans?

- People seems to like it a lot. Good comments and factual reviews. People have bought stuff thru our
website's online shop also. By the way, we do have in our online shop t-shirts that you can not get anywhere
else than from us, so check the sites out! I can promise the design for t-shirt is something else than
white logo on black shirt..


8. Are there any other projects besides this band or is this a full time
line-up?

- This is full time line-up and for the most of us this band is life style. But for example, our basist
Kärtsy Hatakka is primus motor of legendary Finnish band, Waltari. so, he will do music mainly for it..
Me and new guitar player EP Mäkinen have also project together and it is called, Whorion. We have already
recorded some songs for the demo cd and the goal is to get band on the road someday.


9. What direction do you see the music heading into on future releases?

- It seems like "free" downloading is coming to bulldoze physical markets, but what can we do? I think
we don't have any change to stop it. People just don't care. Its a shame, cause I personally like to buy
album and check the booklets thru while I'm listening it. Also every album cover art is as piece of that
art. And for the musicians it is a big loss in money also, if you do this for the money, heheh.. Mp3 and
downloading will conquer cd markets in the future I think, cause everyone likes to listen their fave
songs with their smartphones.


10. What are some bands or musical styles that have influenced the new
material and also what are you listening to nowadays?

- Hmmmm, hard to say. I don't think that there is some special acts that have influenced us lately.
I think it is more life itself that affects to our music. Just take a look around and what you can see,
total chaos all around and it is not gonna change to better.. I listen at the moment lots of Pink Floyd,
AC/DC and The Black Dahlia Murder, heh..


11. Outside of music what are some of your interests?

- For me, there is just this band, hehehhe. I can not live even a one day without thinking this band
some how. So, this is life style as I said before.


12. Any final words or thoughts before we wrap up this interview?

- Hey all ya, check us out and support the bands that you like by buying their cds, merchs and tickets for
the shows! Hopefully we will see you soon on the road! Thanks a lot for interviewing us and Thanks to you
who readed this!

Posted by OccultBlackMetal at 12:32 PM No comments: