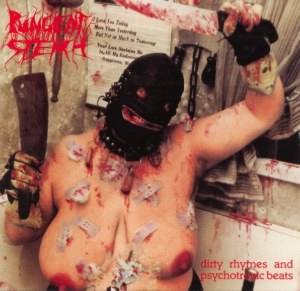 Vocals  are  mostly  easy  to  understand  death metal  growls  while  the  faster  sections  of  the  songs  bring  in  a  decent  amount  of  blast  beats  and  they  also  bring  in  Warning  and  Mentors  covers,  goth  rock  style  keyboards  can  also  be  heard  briefly  along  with  some  techno  and  electronic  music  elements.

On  this  recording  Pungent  Stench  still  was  mostly  influenced  by  death  metal  and  grindcore  mostly  but  also  get  more  experimental  and  changed  their  style  around,  the  production  sounds  very  professional  while  the  lyrics  cover  perversion,  depravity,  gore  and  sick  humour  themes.

Posted by OccultBlackMetal at 6:49 PM